Please come and see me at my new website:

I Want This!: Travel toys website 'My Travel Surprise'

Sometimes you come across a great idea...think that's just what I need...and then you realise that of course this company is based in the UK and you can't get hold of this product in Hong Kong!

My Travel Surprise sells fun & interesting toys to take on holiday.  Knowing that kids loves receiving presents (and parents are happy to oblige in shutting their kids up on a flight), the company even wraps them for you.  Genius.

I know my nearly 4 year old would love the Sticky Mosaic craft project and the Princess Magnet Set for long plane journeys.

Check out the shop here:  http://www.mytravelsurprise.co.uk/

Delivery within UK only
Posted by Nicola at 07:35 No comments:

Email ThisBlogThis!Share to TwitterShare to FacebookShare to Pinterest
Labels: My Travel Surprise, Travelling with kids

We try to do a 2 week US road trip annually.  Our mission to visit all 52 states and to eat at all the restaurants from the TV show, Man Vs Food!

This year it was the turn of Texas.  I have written previous posts on planning road trips and I promise you, with careful preparation, you & the kids will have a great time.

Our route took us: 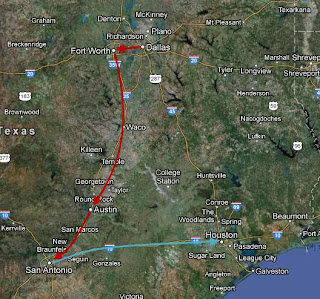 I'll share my thoughts on each of these cities in separate posts but this truly was a road trip to remember.  Certainly for all the Texan BBQ we managed to eat!

Here are some top tips: 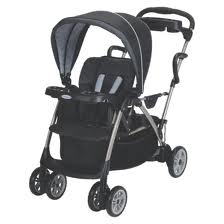 Look what my mum saw at Heathrow Terminal 4. 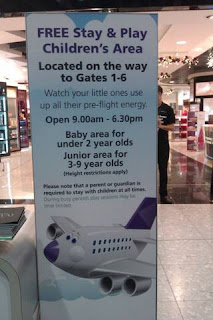 Meanwhile here's a great link to kid facilities at other UK airports:

Marrakech with a 16th mth old

Take a leaf out of Ortal's book and head for exotic climes with your toddler. Here's her review of a trip to Marrakech with her gorgeous 16 mth old Vincent: 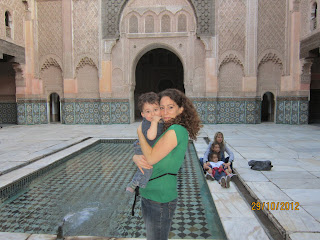 Ortal & Vincent in the grounds of the Koranic School

Marrakech is super baby friendly and accessible, everyone wants to stop you!
You need to know your child as it's very busy and not great to let them out for a run when you are in the market, but if you know they will be distracted by the sights and sounds; horses, camels, motorbikes, cooking smells, bustle etc then it's doable.

Speaking French helps when travelling with a child there but not essential.

We booked the hotel by email and taxi transfers were provided from the airport.  As there was nobody else at the Riad, we all had our own rooms with ensuite, very large and beautiful design.  The hotel provided a travel cot.

The hotel has a plunge pool and jacuzzi.

There is no official 'restaurant' but you can eat your meals there if you give advance notice.

It is lovely and this was my 3rd visit.  However, having now met the owners, I wouldn't return as they are quite strange and were very rude to my mum! 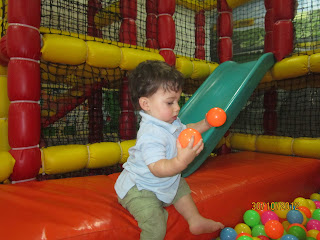 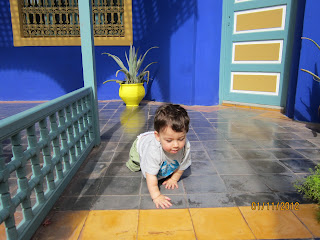 Precheck In
I chose Virgin's Premium Economy over BA as I was able to book an aisle bassinet seat.  For some reason, BA would only let me have a middle bassinet seat (no thank you)

Check In
It's a bit of a scramble at T3's Virgin Check In area.  Designated desks for Premium Economy.

Security
This was dreadful.  We were ushered into a 'Family Lane' which despite being half the size of the normal queue, took twice as long due to parents being stopped to 'test' milk, unpack strollers, tend to crying babies etc.

Onboard
I took the stroller to the Gate and was given Priority Boarding as I had a baby.  I transferred her to my Ergo baby carrier and then trudged aboard.  The plane was an old A340-600 but I do seem to equate old planes with bigger seats.
Seating was 2-4-2 and I had the aisle seat of a '2'.  As luck would have it, there were some empty seats in Premium and the guy seating next to me, moved leaving me with an empty seat beside me. 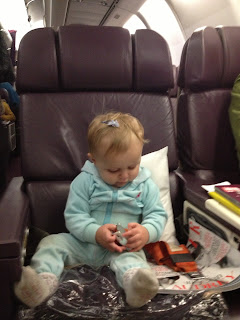 Seats in Premium Economy are roomy and recline quite far back.  The seat was not in the best condition however and the tray table was dirty.

The stewardesses were helpful and filled up her bottle with milk whenever requested.  They weren't overly attentive (as I have experienced on other flights) but would appear quickly if I pressed the call button.

Food was pretty awful and I wasn't offered anything for Sky. Luckily I shared my meal with her and had packed snacks.  The drinks service was good and they regularly offered water.

I hadn't packed much to keep her entertained. She was quite happy to crawl around at my feet, eat the inflight magazines, mess around with the window blind and play with the remote controls.

Bassinet/Sky Cot
You need to request this before you fly and then keep requesting at Check-In/Onboard to make sure they allocate you one.

Virgin's Sky Cot was an odd contraption that looked like a sunken car seat.  On the outbound flight she wasn't that comfortable in it but on this flight, she slept a good 7 hours.  I did have to spend about 10 minutes rocking the bassinet and also draping us both in a blanket to provide darkness!  Check here for dimension's of the baby cots and also weight/height restrictions. 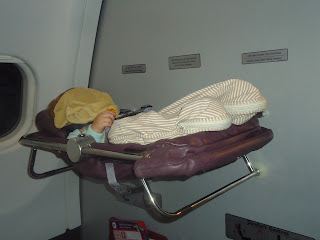 Don't panic... she always sleeps with her comforter over her face!

On landing in Hong Kong, my stroller was at the door of the plane although I did have to wait about 10 minutes for it.

Here's what I packed in my Hand Luggage on this flight:
http://jetlagandmayhem.blogspot.hk/2012/12/what-i-packed-in-hand-luggage-12-hour.html

Ideas for weekend away from HK: Taipei!

Supermum of 2 boys and pregnant with her 3rd, my friend Franny hit up Taiwan's Taipei for a long weekend from Hong Kong and here's her review below:

Taipei is a fantastic Asian city to visit with a family, everyone should go!  My husband bravely took our 3.5 year old, 21 month old and 6 months pregnant wife to Taiwan for 4 nights at the end of October and I would whole-heartedly recommend it for a short family holiday.

Flight
The flight from Hong Kong is just over an hour, the city is easily reachable from the airport, and literally everything we did was very very easy

Hotel
We stayed at the Riviera Hotel  It's a business hotel that I wouldn't normally have considered, but it was recommended by a friend who has been staying there regularly for a decade, and as we booked last minute, a lot of the bigger international chains had no availability for the family sized room we needed. The Riviera's executive rooms have an outer room where we had a cot and a single bed set up, which was separated from the decent-sized bedroom by the bathroom and a short corridor.  For a young family it was perfect as there was no door to close between the two, my husband and I could see through to where the children were, but we could actually have an evening, watch TV and hold a conversation without having to worry about waking the boys.  The breakfast buffet was good and the hotel had a cute rooftop garden growing vegetables and herbs for use in the kitchens.  The hotel is opposite the city's beautifully maintained and very interesting Fine Arts Park.  It was also very reasonably priced.

Getting Around
We only took taxis to and from the airport, using the MRT for everything else as it was so easy, even with a pushchair.  There are well-signed lifts and escalators.  There is no HK style scrum to get on the trains, just orderly lines.  People leapt out of their seats when they saw I was pregnant and the boys were entertained and given gifts by people on virtually every journey.  The MRT also produces a fantastic map of Taipei which is worth getting early on in your trip - we didn't find an English version until the last few days.  The train lines go a long way and it is very easy to get out of the city and into the hills.  The city itself is very green too with loads of gorgeous parks.

Things to do
Sun Yat Sen Memorial Park was fantastic for the boys: flying a cheap kite in front of Taipei 101, lots of bubble-blowing and ice cream, and some very impressive displays of breakdancing to gawk at. 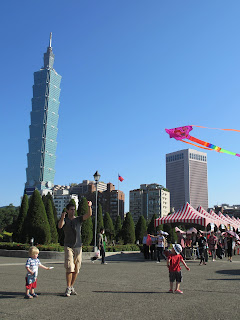 Taipei Zoo - Asia's biggest apparently - was busy on a sunny Sunday, but at only $HK50 for entry, children under 12 free, we couldn't really complain.

You can get a gondola directly from the Zoo up to the tea-growing area, Maokong which was a lovely cool and breezy spot to enjoy some Taiwanese food and tea. 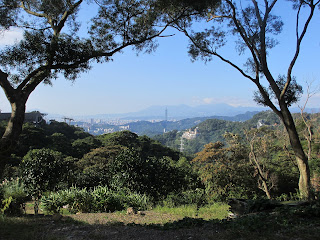 I would have spent more time at Taipei's famous night markets given half the chance, but they were a bit too crowded for 2 hungry little boys.  They happily stuffed themselves on sticks of fruit, but didn't really experiment further than that.

Public toilets are numerous, clean and best of all, often featured a family toilet, with a normal sized loo, mini-loos for toddlers and changing tables all in one large room.
Posted by Nicola at 15:26 No comments: